When considering purchasing a litter box, one of the best choices that are available in the market is the award-winning Modkat litter box, as not only it harmonizes with the decoration of your home, but it also eliminates litter tracking all over the house.

Featured in various magazines and newspapers such as Forbes, Dwell, New York Times, LA Times, Wall Street Journal, The Knot, Houzz, Gizmodo, and Buzzfeed, Modkat litter box XL is very popular with cat owners due to its design as well as looks.

What’s more, the brand Modkat is well known among pet lovers and they introduce a new product in the market only after considerable research and development.

You can check out more best self cleaning cat litter box reviews here.

For doing this task, you do not need any tool as there is a hole in the litter box base of this product for this purpose and this hole would fit in the top cover. But again, you need to ensure that when you fit in the cover, you should hear a clear click sound. The next and final step would be to place the litter box scoop with an added brush on the side of this litter box.

For that purpose, you need to check a part of the scoop that can be used for attachment on the side of this product. Now, the box is ready for your cat!

After going through a number of Modkat Litter Box Reviews and testing ourselves, we would recommend this product to any cat owner. That would be due to several reasons such as easy installation as well as easy access for the cat. The installation itself is very easy and does not require any tool.

Further, it’s also very easy to train your cat to use this product. The Modkat Litter Box is sturdy enough to support 15lbs and compact enough to fit around the corner in a room. It comes in three color variants and looks attractive too. We think you should definitely go for it!

How do you clean Modkat liners?

Modkat liners remain the best choice not only for cleaning Modcat Litter boxes but also for disposing of the old litter present in the box. Further, Modcat Liners offer a hygienic lifestyle for the cat, and also reduces the hassles for you. It increases the life of the litter box as well.

This product stays securely in the box they are installed and contains the mess made by the cat. Although they are reusable, they need to be cleaned at regular intervals. According to the manufacturer, there are two or three ways to clean Modkat Liners and use them again in the litter box.

The second way to clean this product would be to use the enzyme cleaner and follow the instructions given on the bottle for thorough cleaning.

For cat owners, the manufacturers offer various models for the litter box and they vary in design. For example, some models open on the side, while some open on the top and each has its own advantages and disadvantages.

When compared to similar products in its category, the Modkat Litter Box Top Entry have advantages such as reducing litter tracking issue to a large extent and contaminating the floors of your premise. This is mainly due to the fact that when the lid is opened, the remaining litter on the side drops back into the box.

The swivel lid attached to Modkat Litter Box Amazon’also enables easy access for cats. In addition to that, the seamless base prevents leaks. Further, it is perfect for cats with a tendency to go on a side to do their business. This product is also perfect for large cats that weigh up to 12 lbs.

This product is dog-proof and perfect for a household with cats and dogs as pets. In addition to that, the owner can change the liner after 3 months.

If you are confused and want to know other options, then read our guide about different types of cat litter boxes available for your paw friend.

Should you use litter box liners in top entry litter boxes?

The use of liners is very important in any litter box whether it top entry, front entry, or any other configuration. With the use of liners, it becomes easy for cat owners to clean the entire litter box as well as dispose of the old litter without soiling their own hands.

Further, not only the use of liners keep the litter box such as this product hygienic for your cat, but also for you. In this way, the use of liners in any litter box, regardless of its configuration, enhances the quality of your life as well as of your cat.

Thus, it can be stated unequivocally that you should use litter box liners in top entry litter boxes.

How do I keep my litter box from smelling?

While using a litter box such as the  Top Entry litter boxes, one of the most important issues is smelling and you need to take various measures to keep it from smelling and keep the air fresh. The first way is to scoop the litter box daily or more, depending upon the habits of your cat or cats as it cuts down the odor.

The next way to keep the litter box from smelling is to try different kinds of liners and check which one controls the litter odor best. The last and final way to control the odor in a litter box is to check its location (whether it is ventilated or not) and shift the box to an appropriate location that is well-ventilated and allows the odor can fade away fast.

Modkat vs Modkat XL, which one is better?

Modkat litter box and Modkat XL litter box were introduced by the same company and have a lot of similarities, but there are also some differences. The similarities between these two models are that both models are perfect for pets that prefer their side for relieving liquid waste; also the use of both these reusable liners lasts three months.

Moreover, both have ergonomic scoops, and both have a seamless base that prevents leaks. However, when compared, these models also have some significant differences. Firstly, the difference is in the top lid; the Modcat litter box has a swivel lid for easy access, while the XL model litter box has a 3 position lid that makes it easy to clean.

Similarly, the Modkat litter cat model has a top entry, while this litter box is available both with the top as well as front-entry models. Another difference between these two models is that these litter boxes can accommodate the needs of a cat that weighs up to 12 lbs while this XL litter box remains the largest litter box available in the market. Thus, as per your needs and budget, you can choose Modcat or Modcat XL. 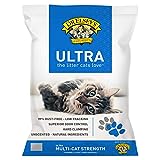